“I wear my sort of clothes to save me the trouble of deciding which clothes to wear.”
— Katharine Hepburn 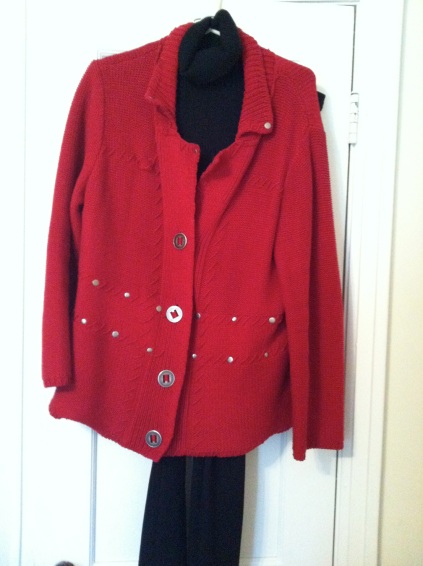 What with this week’s controversy surrounding Susan G. Komen For the Cure’s decision to pull funding for Planned Parenthood (a wrong-headed move, I think), the color pink has been front and center in the news.* This suggests that the darker tone in the palette—red—could be overlooked. That would be a shame, because while the horror that is breast cancer claims far too many lives, it is actually heart disease that kills more than half a million women each year, giving it the dubious distinction of being the leading cause of death among women.

(My thanks to Marlo Thomas and her terrific Huffington Post article for highlighting these surprising statistics.)

Today is National Wear Red Day, and to draw attention to the cause, I’ll be wearing the little number shown above when I leave my laptop to lunch with a few Richmond writers. I’ll also be taking a good, long look at the American Heart Association’s “Go Red for Women” website to educate myself about the topic, and then I’ll make an appointment with my doctor to schedule a heart-health checkup.

Why has this issue commanded my attention—even more than the other distressing health topic in the news this week? Because I have a sneaking suspicion that if any disease is going to nab me, it will have something to do with my heart, and not the flesh covering it. And this from a woman who’s already had cancer.

My father died in 1969, two weeks after suffering a massive heart attack. He was only 48-years old. (I was 13. I have now lived seven years longer than he.) His illness occurred in the days before cardiac care units; he spent the last weeks of his life in an intensive care ward, surrounded by other desperately ill or injured patients—an environment hardly conducive to reducing one’s stress level.

His death was one of the most formative experiences in my life, and there’s much more to say about it in a future post. (More to say about my thyroid cancer, too.) But for now, the point I’m trying to make is that my genetic predisposition for heart disease is pretty strong. And I have what Dr. Oz calls the number one “symptom to watch for [—] shortness of breath.” I’d like to pretend these things don’t exist—going to the doctor for any reason is not my favorite pastime—but I really know better. And I really need to know more.

Please read Marlo’s article. There’s a lot of great information to be found there. She’s interviewed Dr. Oz, as well as Barbra Streisand, whom she calls “a front line soldier in the fight against women’s heart disease.” I was not aware that the number one symptom of heart disease is shortness of breath. I’m ready to take action now.

And I’m ready to make my fashion statement.

Oh, and one more thing: I’ll be sending positive energy to every woman affected by either of these awful diseases. Let’s work to help rid the world of both of ’em. Okay?

*A CNN alert on my iPhone just as I was about to publish this post reports that the Komen Foundation has reversed its decision: “Susan G. Komen for the Cure to restore Planned Parenthood breast cancer screening funds, Sen. Frank Lautenberg says.” Let’s hope so…

Had fashions in the late 1960s been otherwise, I would not have the strength of character that I possess today. I was born with complicated hair—thick, unmanageable, impossibly curly hair. And not the good kind of curly, either—the Andie McDowell/Julianna Margulies-kind of curly—just coarse and wiry and frizzy hair. This frizzled look would be en vogue today, when stylists spend considerable time crafting the look for runway models—a look that used to send me reeling in horror from the bathroom mirror. No, mine was the era of Carnaby Street, Twiggy, and the Summer of Love, and I had complicated hair. The fashion at the time was either cropped short, like the iconic pixie cut Vidal Sassoon created for Mia Farrow in Rosemary’s Baby, or long, sleek, and straight, like Jean Shrimpton or Julie Christie—all blondes, I might add. Relief came for a little dark-haired girl in the form of a beautiful brunette named Marlo Thomas, who, in the landmark television series That Girl, wore her straight glossy hair in a flip with bangs. The fact that Marlo was Italian and Lebanese, just like me, and had a father with whom I’d been photographed earlier in the decade, clinched the deal. She—that girl!—would be my role model. God knows, I needed one. I had complicated hair.

“You have to suffer to be beautiful.”

That’s my godmother, “Aunt Fannie,” speaking. It’s 1968, and I’m in the seventh grade at St. Mary’s School in Elyria, Ohio. We’re having our class pictures taken in a few days, and my parents have driven me to her house to have my hair done.

Perhaps I should explain.

Aunt Fannie was a licensed beautician. (That’s what they called hair stylists in those days.) My godfather, Uncle Bill, was a gifted carpenter, and although he was not a professional contractor, he built their lovely ranch home in a rural part of Elyria from the ground up, and turned one of their basement rooms into a hair salon for my godmother. My father drove my mother there to have her hair done each week, and I was always in tow. With school-picture day looming, I begged and pleaded with my parents to let Aunt Fannie cut my hair so that I would have bangs and a flip, just like That Girl.

I finally wore them down. It wasn’t long before I was seated in the chair that swiveled around like a carnival ride. Aunt Fannie’s fingers wielded the silver scissors like some magician’s wand—snip! snip! snip! I had been turned away from the mirror the entire time, and couldn’t wait to see my idol’s impeccable hairdo in place of my tangled Medusa mane. When she spun me around, I was shocked.

None of us had really taken my thick frizz into account when calibrating the outcome of my longed-for flip hairdo with bangs. The flip flopped, and I looked like a Labradoodle. I hesitate to say this, because you’ll think that I spent my entire childhood in tears, but I have to tell you that I cried. Not a full-throated cry—just a whimper, with a steady stream running down my cheeks.

“Isn’t–isn’t there anything you can do?” I asked my godmother, sniffling. Flat irons had not yet been invented. She thought a moment, then brightened.

“We can straighten it!”

My father, who had been watching television in the other room, walked by just in time to hear this. “Not if I have anything to say about it!” he thundered. “She has beautiful hair. You never should have cut it in the first place.”

“But George, look at her,” my mother said. “She can’t go around looking like this!”

“I can’t go around looking like this, Daddy.” I thought he should know where I stood on the matter.

The tension in the air was palpable. My parents exchanged words. Aunt Fannie busied herself by rearranging her hair clip drawer. I escaped upstairs to soothe my nerves with a tall glass of 7-Up. When I came back down, the charged atmosphere had eased. I’ll never know who convinced him—my mother or Aunt Fannie—but my father had backed down. Aunt Fannie was mixing the chemicals that would solve the crisis and turn me into “That Girl” for my school pictures.

“This stuff stinks!” I cried when she began stirring the mixture near me. And when she started combing the goop through my hair, my eyes began to water—and not from tears. “It burns!”

“You have to suffer to be beautiful,” she replied sagely.

I don’t remember how long I sat in that chair. It seemed like months. But I finally was directed to the shampoo bowl, and felt the cool relief of water soothe away the stinging, rotten-egg smell of the straightener. Aunt Fannie washed and conditioned my hair and combed it through. I was entranced! When I touched it, it felt smooth and sleek; I had never experienced such a sensation in relation to my own hair before. My head looked smaller, too. It wasn’t my hair anymore; it wasn’t me. It was better. New and improved, as the commercials used to say.

Aunt Fannie set my hair in rollers and sat me under the dryer, where I perused the latest movie magazines. When I was dry—cheeks red and hot from the heated air, rolled hair crisp to the touch—Aunt Fannie set me back in the swivel chair, where she began unpinning the rollers, vigorously brushing out my new hair.

It gleamed. It shined. I had never seen anything like it. She sprayed hairspray all over me—the air was thick with it. I sneezed and coughed. But I looked beautiful.

You have to suffer to be beautiful.

And you are! Look at that girl! 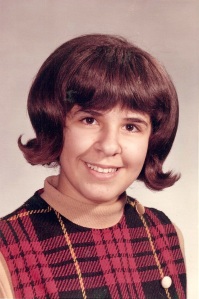