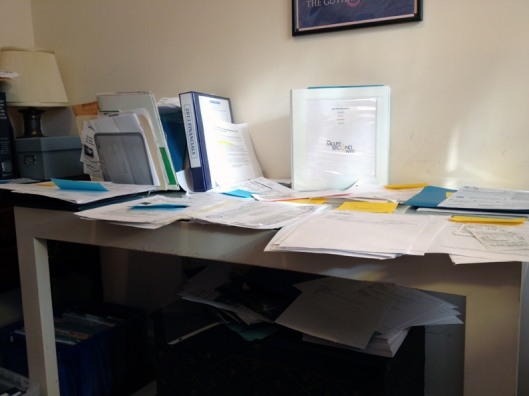 I have all three in my office—rocks gathered from different hikes in Northeast Ohio, a beautiful pair of scissors that I inherited from one of my favorite uncles, and paper. Piles and piles of paper. In my office, in my life, paper has always been the winner, hands down, a fact made abundantly clear when I began organizing my office in January for our move from Virginia to Ohio. Just take a look at this photo. See what I mean?

And so it was that I embraced the opportunity to review the NeatDesk Desktop Scanner as a member of Viewpoints Blogger Review Panel. The timing could not have been more optimal: Not only did I have to purge what seemed like tons of paper files, separating the wheat from the chaff (and here I must give a shout-out to my trusty Fellowes paper shredder), I also realized that many documents moldering away in buff-colored three-tab files were in need of digitizing. Moreover, my husband and I were in the process of purchasing a new home in a western suburb of Cleveland. Our lender, several states away in Minnesota, needed about a zillion documents from us, verifying everything about us, from our identities to our net worth to our hopes and dreams. (Ah, for the old days of corner neighborhood banks. But that’s another post.) Of course everything that our lender required must be sent via secure email. Of course none of what he needed was e-mailable.

One particular item that our kind but gently insistent broker insisted upon was a profit-loss statement for my business. For that I would need a bookkeeper (up to this point I’d been muddling through with my cockamamie system). But a bookkeeper would need access to an entire year’s worth of receipts. Of course the bookkeeper I selected was in Ohio. I was in Virginia. Her location would be convenient for future fiscal years; for the one at hand, not so much.

No, I needed a dependable scanner. I had a scanner, mind you, but it was a dinosaur, part of the bulky copier that once belonged to husband. You might be familiar with the process: place the document face down on the screen, open up your computer’s scanning program, hit overview, wait, hit scan, do it all over again because you forgot to switch modes from JPEG to PDF…As a nice finishing touch, the scanner I used accented each document with a rugged black vertical line somewhat right of center.

Readers, I was in dire need of scanner relief.

And so the NeatDesk Scanner, which filled me with such joy upon its arrival that I marked the occasion photographically: 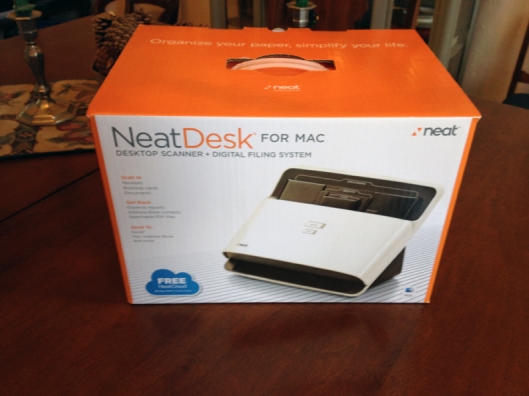 I found the software easy to install (I used the version for the Mac—PC versions are also available—but I’ve subsequently learned that those using a MacBook Air rather than a MacBook Pro had considerable difficulty in that the MacBook Air lacks a CD-Rom drive, essential for installing the NeatWorks for Mac software.) You can read the reviews of my colleagues on the Viewpoints Blogger Review panel here, and learn what a NeatDesk spokesperson had to say for those using Netbooks.

You might also want to take a look at our Viewpoints video on YouTube, featuring our opinions about the NeatDesk scanner.

I should note that when I  first used the scanner, I ran into a spot of trouble. I called Tech Support and the person I spoke with could not have been more helpful and patient. For someone such as myself, who knows enough about technology (and I actually think I know a fair amount) to be dangerous, clarity, patience, and successful results from Tech Support is critically important.

One final caveat: In addition to being sent the scanner, which I do plan on keeping (thank you, Viewpoints!), we were all given a 30-day free trial of Neat’s Cloud service. Maybe it’s just me, but I’ve always been leery of the Cloud. I have an Apple Time Machine that backs up my computer, so losing files isn’t a concern. I don’t consider my modest operations so critical as to warrant information access across all my devices (iPhone, iPad, laptop). At $14.95 per month (I kept the Cloud service for two months), I just couldn’t justify the cost and so I canceled the service.

Now to what I simply adore about the NeatDesk scanner: how swiftly it turns paper into PDFs. I run a document through the scanner, and it shows up on the Table Pane in the NeatWorks software. All I have to do is drag the scanned document to my desktop and voilà! Instant PDF! Although the scanner populates information from a receipt intuitively, it doesn’t always do so accurately. Like any task involving the transmission of information, one must check one’s work and the work of anyone (or anything) done on your behalf. I did not find this a negative; it took me a nanosecond to enter the correct information. I also found that selecting the “document” mode rather than the “receipt” mode eliminated the problem, and also empowered me to enter information the way I wanted.

Take a look at my desk’s “After” picture. Not only did the NeatDesk scanner help me to eliminate the visual clutter threatening to clutter my mind, it allowed me to zip through the myriad requests of our lender in record time. And now, for the first time, I have a proper profit-loss statement for my business. A task I had been dreading was actually fun—the sense of accomplishment gained by scanning all of those receipts and shuttling them off to my bookkeeper was almost as gratifying as putting the finishing touches on an essay! 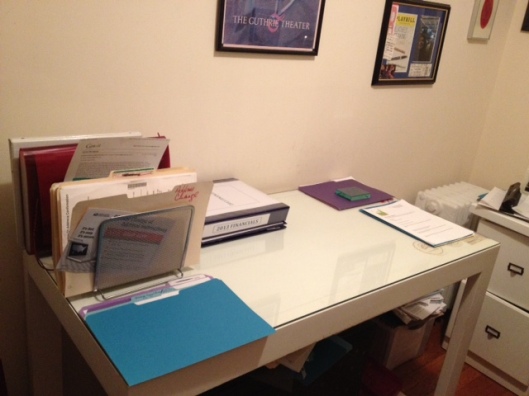 Now you might say that I was primed to love the NeatDesk scanner, having needed it so desperately. You might say that I would turn a blind eye to any faults. And to a certain extent that’s probably true, despite the aforementioned caveats. My approach to any new technology claiming to help me gain efficiencies is this: I learn what I must learn in order to accomplish what I need, and that is all, until I need to learn more. I downloaded the User’s Guide for the scanner and it’s there for me when I’m ready to tackle more complicated problems. Some have said, upon digging deeper, that the scanner itself is complicated to use. That might be, but I did not find it to be the case. I’m sure that the NeatDesk scanner is capable of far more than my current demands, but to take me from the first photo to what you see above was, in my view, an Olympian accomplishment worthy of my highest rating: five gold rings.