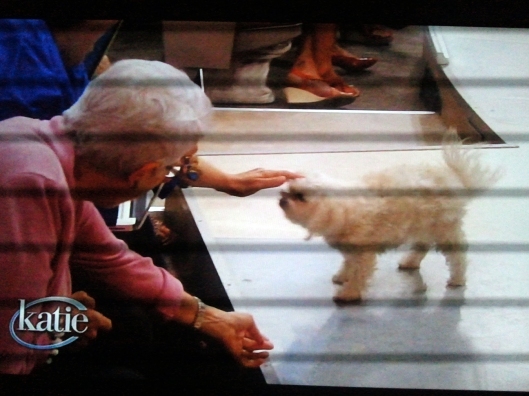 You never can tell what each day will bring. One morning you’re driving to New York City to join the audience of Katie Couric’s new talk show as a member of her blogging crew, the next thing you know, Rigby Sue Sarandon, one of Susan Sarandon’s two sweet puppies, interrupts her grand entrance to make a beeline for you.

Once upon a time, no canine grapevine was quite as effective as the “Twilight Bark,” the alert system popularized by Disney’s classic animated film One Hundred and One Dalmations. But as social media has changed for humans, it stands to reason that the ways in which household pets communicate across great distances have also undergone a paradigm shift. Although I didn’t know it yet, something was afoot, and I suspect that Sandy, our Cavalier King Charles Spaniel, had a paw in what it was. She’s not much of a barker, but she does have her own Facebook page… 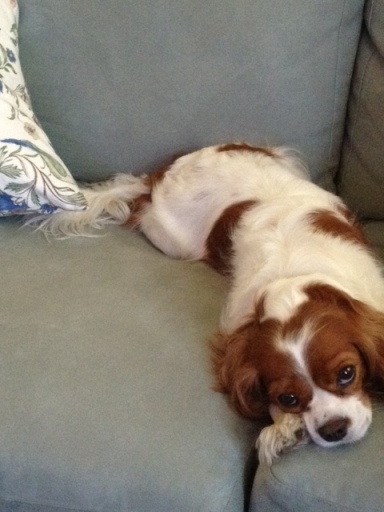 Sandy Rich is waiting for ‘Katie’ to come on. She heard that Susan Sarandon’s puppies were going to make a cameo appearance.

…and the Sarandon dogs—Rigby Sue and Penny Lane—each have their own Twitter accounts. (Sandy has been clamoring to get on Twitter. She wants to parody the Honest Toddler by calling herself the Candid Spaniel, thereby cashing in on the adorably snarky tot’s popularity. I told her not to obsess over the commercial aspects of her brand—that she should instead focus on her art. She walked away from me.)

I imagine that somehow—whether by status update or tweet—a communication chain commences. Rigby (whom Sarandon acknowledged on national television has addiction problems—perhaps to Twitter?), ignores the stage manager’s directions and scrambles over to where I am sitting. Just as she is about to dive into my arms (I’m sure that was her intention), an ABC official scoops her up and carts her back to her owner. Rigby, although our time together was brief, I will always remember you…

…Just as I will always remember another celebrity dog whom I happened to meet (by coincidence? by canine social media intervention?) less than four hours later.

After taping ends, my husband and I leave the ABC Studios in midtown Manhattan and drive across the George Washington Bridge toward Tappan, the hamlet where he grew up. We are spending the night with one of John’s old school chums and his wife. In residence at Mike and Mary Jane’s are two dogs. One belongs to their adult son. The other, Ka’ala, is even more tenuously related—her owner is the best friend of their adult daughter. Ka’ala and I really hit it off. She brings me toys to inspect, sleeps outside our room that night, and is the first to greet me in the morning (after John, of course).

Now as far as I know, Ka’ala is not wired into social media. 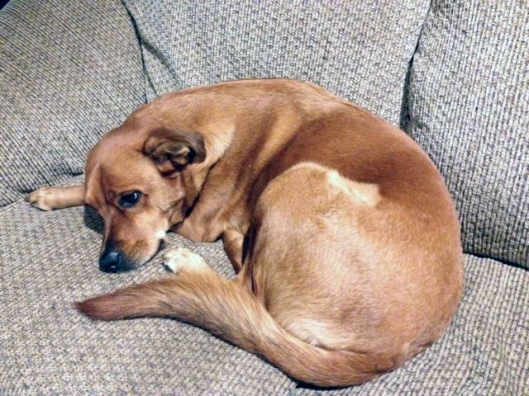 Ka’ala, Hayden Panettiere’s lovable mixed-breed rescue dog, is one link in the chain of canine coincidence.

But her owner, Hayden Panettiere, star of the new ABC musical-drama Nashville, is.

Imagine the scenario: Sandy is posting status updates on Facebook, the Sarandon pups are tweeting, and Ka’ala, sensing—with the innate sixth sense of the canine—the chain of coincidence, logs into Hayden’s Twitter account to follow the action.

Is there a new Disney animated film somewhere in this scenario? Pixar perhaps? Pete Docter, call me.

So, to recap, let’s all play Three Degrees of Celebrity Dog Whispering!

Ka’ala is owned by Hayden Panettiere, who stars in Nashville, which was created by Callie Khouri*, winner of the Academy Award for her screenplay Thelma & Louise, the iconic film starring Geena Davis and …

… Susan Sarandon, owner of Rigby Sue and Penny Lane. Rigby Sue made an enduring connection with…

Wait—what? The Midlife Second Wife is not a celebrity? Look—please do me a favor. Don’t let Sandy know.

*Callie Khouri is also of Lebanese descent, and so am I, on my father’s side. But that’s another blog post. 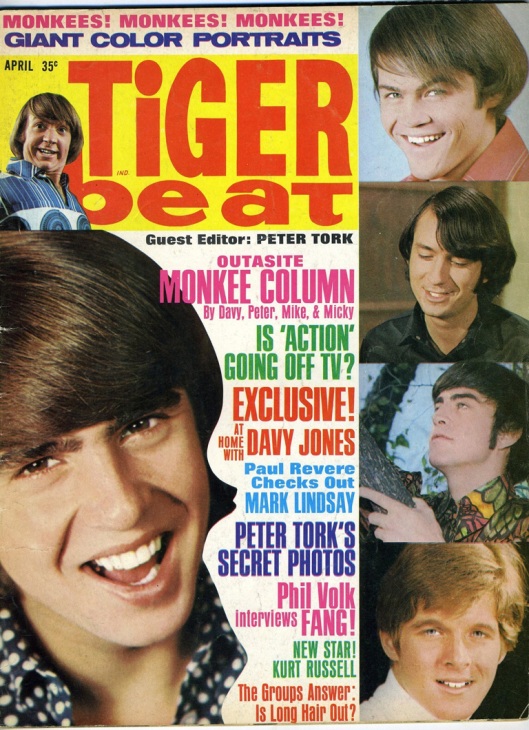 In 1966, the answers to two questions firmly established one’s taste, refinement, and standing as a female connoisseur of pop music and teenybopper sex appeal:

At age 10, my bona fides in this regard were solid. I stood with the majority of young starstruck fans: My favorite Beatle was Paul, and my favorite Monkee—that made-for-TV music group modeled on the Fab Four—was Davy Jones. Yesterday Jones died of a heart attack at the age of 66 in Florida. When the ABC News tweet showed up in my Twitter feed, I stopped what I was doing and revised my priorities. My childhood crush had died, simultaneously taking with him a part of my childhood and giving it back to me. Respect must be paid.

As crushes go, mine was all-encompassing. There was something about that sweet smile, that guileless face, that thick glossy hair (I ask you: Was he not the Justin Bieber of his day?), that adorable British accent, that made me melt. So what if he was short? At 10 I was probably already as tall as he was. I didn’t care. And I knew that if only Davy Jones could meet me, he wouldn’t care either. (The conviction of a child’s crush is as immutable as, well, the sounds emanating from a transistor radio. I would fall asleep each night with mine tucked beneath my pillow, listening to CKLW, the AM rock station out of Windsor, Ontario, which cut a wide swath through the airwaves—I lived 25 miles outside of Cleveland.)

I watched each episode of The Monkees, saved my change to buy every issue of Tiger Beat featuring Davy on the cover, and even though I owned two Monkees albums, I still bought their singles on 45s. I’ve no idea now where the albums are, but in an orange 45-record case—buried somewhere in the attic or garage—and filed in careful alphabetical order, are “A Little Bit Me, A Little Bit You;” “Daydream Believer;” “I’m a Believer;” “(I’m Not Your) Steppin’ Stone (those three words tucked away in their parentheses fascinated me); “Last Train to Clarksville;” and “Pleasant Valley Sunday.”

Years pass. The Summer of Love in 1967 brings new sounds through my transistor. I start high school in 1970, and discover progressive rock. I no longer listen to CKLW; with the conviction of a music snob or dilettante, I keep my dial tuned to Cleveland’s WMMS. I distance myself from my obsession with The Monkees. They were for kids, and I had become a teenager, a young adult possessed of all the worldly wisdom you’d expect her to have, which is to say very little indeed.

What strikes me now as I reflect on this, and on Davy Jones’ passing, is how vitally important some things become to us at certain times in our lives, how our fascination with them vanishes, and how, inevitably and with increasing frequency, mortality will bring us up short and return those things to us, as fresh and new as ever. We’ll never see Davy Jones flash that innocent grin again, or speak in that charming accent, but his music will live on. I reach for my iPhone and program Pandora to The Monkees station. Now the memories are flooding back. I can’t stop them, nor do I want to.