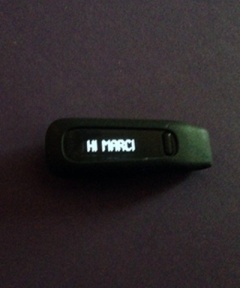 Just one of the ways the FitBit One greets me after I’ve been away.

Disclosure: I am participating in the Verizon Boomer Voices program and have been provided with a wireless device and six months of service in exchange for my honest opinions about the product.

You have to love an electronic device that cares enough to remember your name. And you know the relationship is promising when it strives to keep you motivated throughout your weight-loss program without barking like a drill sergeant or Jillian Michaels. For two weeks this month, I’ve dated—er, tested—the FitBit One, an adorable, unassuming little device, no bigger than an eraser, but with the brains of a computer and the heart of a personal trainer who really wants you to do well.

If only an eraser could make those pounds and all that cellulite vanish! —MorgueFile image

My son is getting married in a month. If there’s to be room for the mother of the groom in the dress that I bought, I should lose at least ten pounds before the wedding. As of this writing, I’ve lost six, and I have two trusty tools in my arsenal to thank for this success: the Digest Diet, a variation of which I’ve gone back on (you can read about my earlier success on the diet here) and the FitBit One.

You’ve no doubt heard that the path to great health is walking 10,000 steps each day. Well, FitBit has heard about that, too. Any day that you reach that goal (and I reached it…once), FitBit’s screen lights up with a sort of “atta girl!” message.

FitBit is more than a glorified pedometer, though. It tracks how many calories you burn each day and how many flights of stairs you climb. It also translates the number of steps walked into number of miles traveled. It’s genius, however, is in its ability to sync wirelessly with select computers and mobile devices—Mac or PC. 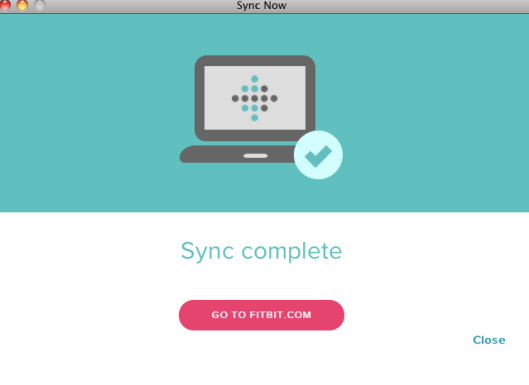 I downloaded the free FitBit APPs for my iPhone, my iPad, and the DROID I’m still testing. Control central, however, is my laptop, which I’m on every morning. There’s a mysterious little device that comes with the FitBit called a “Dongle.” Don’t ask. You plug that into your computer’s USB port, place your FitBit next to it, and it begins to sync. Once finished, you’re directed to log on to the account you’ve set up on FitBit.com. Check your tallies for the day, and you’ll see your stats appear on the site. Place your FitBit next to your mobile device, and it automatically syncs without your having to lift a finger.

There are bits of data you need to record manually. FitBit is not equipped—not yet, anyway—to miraculously determine what food you’ve eaten, how much of it, or when. But if you’re dieting you’re likely to keep a food log anyway; simply use the food log on the FitBit site. The calories are already programmed for many of the foods you are likely to eat, just enter your portions. Unusual items, like homemade, recipe-specific meals (the foods I prepare for the Digest Diet, for example), must be entered manually, but once you’ve done so they’re saved in your list of foods. Simply start typing to enter and the site’s predictive text brings it right up. Click and your entry is logged.

You can also record such activities as swimming, running, and other forms of exercise. And of course, each morning after you’ve weighed yourself, enter that, too.

Finally, if you’ve ever wondered whether you’re really getting a good night’s sleep, FitBit can tell you. Place it in the wristband that came with it, put it on the wrist of your non-dominant hand, and while you are sleeping, the FitBit records how many times you wake up and how long you’ve slumbered, gauging the efficiency of your sleep. It can even wake you up, if you like. And gently. Just set the alarm.

Since a wedding is prompting me to focus on my weight loss and overall physical health, I propose another perfect union: Digest Diet and FitBit should get married. The two together are simply awesome. (And it would be nice to have my favorite Digest Diet recipes already loaded into the device’s algorithms.)

Now that would be a perfect match.

The FitBit One retails for $99.99 and includes a rechargeable battery. Use of the FitBit website is free, but if you want to participate in FitBit Benchmark, an interactive tool that gives you access to the entire FitBit database, allowing you to track your progress against that of other users, you need to pay an annual premium membership fee of $49.99.

I made this delicious Kale and Chick Pea Soup for dinner on Day 1. John liked it, too!

As I write this I’m into the third day of the Digest Diet. It’s nearly noon, I’m not even hungry yet, and I’ve lost two pounds.

I’ve been dreading writing about the poundage issue. I’m the one who removes every bit of jewelry, eyeglasses, and shoes before getting on the scale in the doctor’s office. Yes, I shave a few of them off my driver’s license renewal application. I’ve never uttered the numbers aloud to anyone, really. But if I’m going to do this, and have any hope of inspiring you to a healthier lifestyle, I need to ‘fess up. The morning I started the diet, I weighed (closes eyes, takes a deep breath) 210 pounds.

This picture, taken this morning, is my “before” picture. Note that I had already lost two pounds since Monday.

In my defense, somewhere along the way I lost half-an-inch. I have no idea where it went. But this morning when I weighed myself, I had lost two pounds, so maybe the pounds and the half-inch are in that nether place where lost things go—socks in the dryer, pens and keys—hanging out and having a good laugh about what it was like to have once been part of me. I like to think I gave them a good time.

For as long as I can remember, I was five-feet-seven-and-a-half inches in my stocking feet. Until I wasn’t. I also weighed 125 pounds on the day of my first wedding. I have fond memories of that 21-year-old body. And it saddens me to admit that even then, I thought I was heavy. (My second husband, bless his heart, told me early in our relationship that he “loves every inch and every ounce” of me. I ask you: Am I not the luckiest gal in the world?)

Let me be clear: I’ve never had an eating disorder of any sort, unless having a gusto for gastronomy to go with my zest for life can be called a disorder. (It can’t. And it shouldn’t.) But I was always aware that I tended toward the upper regions of the scale. My first conscious memory of this was shopping for school clothes and being directed to the rack on which the 6-Xs hung. Still, I was never really what you would call obsessed with my weight. I liked my body well enough—and I appreciate it even more now, even when certain parts tend to make their presence known in the way of aching joints and lower back pain. And even when the inventory of my “parts list” has been diminished by numerous operations. No, my attempts at dieting were typically triggered by a special event or a special outfit. And they were always, until reaching life’s midpoint, successful. The best diet up until this one was something published in Glamour Magazine in 1974—”The Do and Don’t Diet.” I would love to find a copy of this somewhere.

But here I am, trying this Digest Diet, and I have to say how impressed I am. The shakes are so filling that a couple of times I haven’t been able to finish them. They’re delicious, and so is the soup I made the other night. (Tonight I’m going to make a shrimp soup.) I’ve walked one mile each day for the last three days. With the exception of yesterday, when I slept in because I was plainly exhausted, I’ve felt energized. I recognize that what I’m doing is retraining myself how to eat. The book, written by Liz Vaccariello, explains the theoretical underpinnings of the recipes and food plans. Certain foods are fat releasers, others are fat retainers. The fact that all of this has already been figured out and tested, using current science, makes it pretty easy to follow. I measure ingredients, but I don’t have to weigh anything, count any calories, or keep track of points or carbohydrate grams. The premise that I love the best about this diet is that I’m eating whole, natural foods. I’ve been tempted by try those quick-fast meals and prepared shakes, but I’ve always feared the slippery slope of their preservatives and artificial ingredients.

So what are my goals for this? My first goal is simple: to remain on it for the full 21 days without backsliding. My second goal is to lose 15 pounds. That will get me below 200, something I haven’t been for a very long time. Bound up with these goals are others, like feeling more energetic, reducing pain in my joints, and finding the motivation to exercise everyday. The fact that I can likely achieve these goals while improving my health is a tremendous bonus.

I’ll have more to say about body image in a future post. But for now, I’d like to share with you an article that really touched a nerve with me. Tell me, has anyone ever made you feel bad about the way you looked?

Other than providing me with a copy of The Digest Diet, Readers’ Digest is not paying me to blog about my experience on the program. (If I lose the weight I hope to lose, that will be compensation enough.)