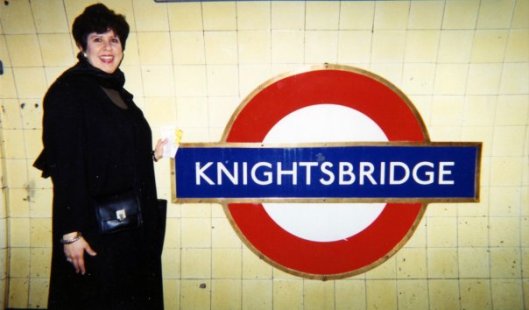 Before I was the Midlife Second Wife, in London’s Underground

I could have sworn that the blond man sitting near the front of the Gloucester Pub in London’s Knightsbridge district was Robert Redford. You don’t forget a chiseled face like his, nor do you forget that trademark orb of yellow hair. I’d been half in love with Redford since seeing the film that inspired me to major in journalism: All the President’s Men. (For most women it’s The Way We Were. Go figure.) If I hadn’t been with two friends, or so utterly gobsmacked by my first (and only) trip across the pond, I might have lingered to make sure that the flesh-and-blood visage sitting several tables away matched up with the celluloid version. But my friends and I, famished and travel-weary after our trans-Atlantic flight, were eager for nourishment before checking into the Chelsea Hotel* on the other side of Sloane Street.

And, truth be told, shyness and a sense of decorum prevented me from intruding on a celebrity’s luncheon.

I ordered the Cottage Pie because, you know, when in London…

The food was good but the coffee was bad.

Exiting the pub, we saw we were surrounded by designer boutiques. I noted three of them: Armani, Chanel, and a shop called À la Mode. And of course there was Harrods.

Princess Diana had died only a few months before—the city was still reeling from her loss—and we were in the heart of her territory. With her friends, when she was merely Lady Di, the area was their shopping stomping ground. As such, they were nicknamed after the fashionable street: they were the “Sloane Rangers.”

Walking towards our hotel, I saw more people using cellular phones (for that’s what they called them then) than I’d ever seen in one place before. Entering the sleek, contemporary lobby, the delicate fragrance of lemon verbena seemed to permeate the air. This is from the travel journal I kept for part of my trip:

There is a pervasive … citrus-y scent to the air in London—in our room, noticed it in the Rolls, even catch wafts of it on the street. This is a dream city, unreal, unlike anything I’ve ever experienced.

I had been transported into a land of luxury.

How did I ever get here? The farthest I’d been from my home in Ohio was California. I felt as though I were living a dream I never knew I had.

My supremely talented friend was to thank for all of this. An award-winning classical violinist, she had snagged the performance plum of a lifetime: a bill on the program for a joint celebration concert: the 50th Anniversary of the Royal Philharmonic Orchestra and the 50th birthday of Elton John. The gala event would benefit John’s AIDS Foundation. My friend had invited me to attend as her guest, along with her conservatory teacher, and another woman who would become my friend as well. We had only to provide the cost of our airfare and meals.

I started my journal on the plane. Since I was reading Milan Kundera’s The Unbearable Lightness of Being at the time, I began the diary with a quote from the book:

‘There is a certain part of all of us that lives outside of time.’

On the tarmac, reflecting on the route that would take me from Cleveland to Chicago to Toronto, then south of Newfoundland to Ireland, South Wales, and finally London, I wrote:

Imagine: When we do touch down, it will only be 15 minutes later! [I’m] moving backward in time…

Plucked from the rituals of my satisfying but ordinary life, I was time’s fugitive, granted six days to witness and experience sights and sounds (and fragrances, like the lemon verbena that haunts me still) that I never expected to encounter. Nor have I ever encountered anything like them again. Here are some highlights from my itinerary:

Monday Evening, December 15, 1997
A Rolls Royce picks us up at the Chelsea to deliver us to Mayfair, where the impresario who arranged my friend’s performance hosts us to a five-course meal at Les Saveurs:

On our way out, the chef, Jean Christophe Novelli, stops us to say he had taken particular care with our orders. I tell him the food was exquisite, and he seems genuinely touched. He asks where I am from, and when I tell him he says that a New York writer is dining at the restaurant that evening.

Tuesday, December 16, 1997
Christmas shopping at Harrods…saw a shrine to Diana and Dodi al Fayed [his father owned Harrods]—quite moving…beautiful portraits of them both.

To the Barbican Centre for L’s rehearsal, followed by a quick pilgrimage to the Guildhall School of Music and Drama next door. Afterwards, high tea at the Hyde Park Hotel, in a private area off the lobby. 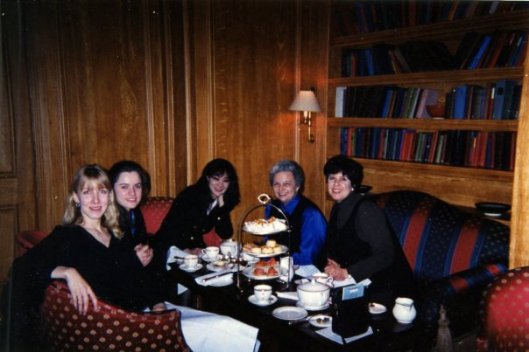 Another quick pilgrimage—to Westminster Abbey—follows high tea, then a rushed trip on the Underground back to the hotel to prepare for a concert in the Purcell Room at the Royal Festival Hall given by another violinist, a friend of my travel companions.

The next evening, a Wednesday, was the reason for our trip: the gala performance at the Royal Albert Hall, with Vanessa Redgrave serving as master of ceremonies. L, resplendent in a red Armani gown, performed Sarasate’s Carmen Fantasy with the Royal Philharmonic Orchestra. (Who conducted? Was it Sir Simon Rattle? I cannot remember and I cannot find my program. This bothers me to no end.)

My two travel companions and I left London for Paris by way of the Channel Tunnel. In four days I would be back home. A whirlwind escapade in every sense of the word.

I’ve not been overseas since that trip, but it transformed me in ways that are still revealing themselves to me. (And I’m not thinking only about my sudden immersion into a heretofore unknown world of luxury.) I realize that because of that journey, I finally abandoned my fear of the new and unfamiliar. (I think I would even say hello to Robert Redford now, were I to spot him in a pub. Although I’d still maintain my decorum by being polite and mercifully brief.) I didn’t flinch when, 13 years later, I moved from the region where I’d spent my entire life to begin a new one with my new husband in Virginia.

Time, they say, waits for no one, but I made time wait for me while I settled into a new life.

“Time,” I wrote then in my journal, “is caught in fierce snatches…. No opportunity for extended reflection, so necessary in trying to capture the details of all we’re experiencing. Many entries—such as this one—recorded days later. Memory will have to shoulder the burden…”

Memory…and the scent of lemon verbena.

*The Chelsea Hotel is now the Millenium Hotel.