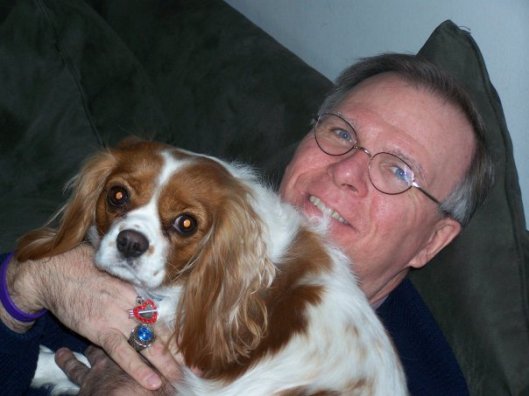 My husband John with our dog Sandy

When you marry for the second time—especially later in life—anniversaries become particularly significant: we know that time is fleeting, each milestone is precious, and because life can turn on a dime, so is each day. Each year together is a gift. In August John and I marked our third wedding anniversary. For the last three years (four if you count our courtship), I’m reminded, in the following month, just how fragile the gift of our togetherness is, and the gift of our love. John was supposed to be on the 98th floor of the North Tower of the World Trade Center on the morning of September 11, 2001. And because of a fateful decision, he is here, with me, today.

If you’ve followed this blog from the beginning, please forgive my retelling this story. It’s important to me, each September 11, to republish my original post, which first appeared on the tenth anniversary of that horrific, world-changing day.

Because anniversaries are significant. Because time is fleeting. Because each milestone is precious. Because life can turn on a dime, or on an impulsive decision.

Dedicated to the victims and heroes who died on 9/11, and to those whose lives were forever changed.

Ten years, two months, and 26 days ago, 33 passengers and seven crew members of United Airlines Flight 93 were flying to San Francisco. For some of them, San Francisco was home; for others, it was a business destination or a layover en route elsewhere. We know, of course, what happened that day: none of them reached their various destinations. On our way home, following a Thanksgiving gathering with our children, John and I took a brief detour on the drive through Pennsylvania to the rural hamlet of Shanksville. We wanted to pay our respects to those souls lost when the hijacked plane went down in an open field, following the valiant efforts of many passengers and crew members. Those heroic people very likely saved the U.S. Capitol from a terrorist attack on that devastating day of tragedy. The Flight 93 National Memorial, if you have yet to make the pilgrimage, is a place like no other. I have not yet collected my thoughts about the experience; all I can tell you is that my heart was literally heavy as we drove the long, winding road toward the memorial marking the site. I took a few pictures, and, for now, will let them speak for me. We are home and glad to be home, and mindful of those who were unable to complete their journeys.

The marble slabs, engraved with the names of the victims, mark Flight 93's flight path before it crashed.

A broad-planked wooden gate separates the memorial from the boulder which marks the crash site. 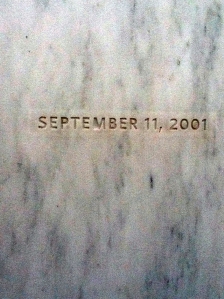