The lovely bones go into the pot. The chicken is reserved for another use.

Barbara Kafka calls chicken stock “the universal solvent of the kitchen.” I wholeheartedly agree. So many recipes that I love call for chicken stock, and it’s essential that I have it on hand. As one reader pointed out last week, store-bought stock—even the organic versions—are laden with salt. This recipe is not. This is what you’ll want to use. Besides being embarrassingly easy to make, it’s economical, and it will fill your home with the aroma of simmering goodness—a perfect antidote to a cold autumn or winter day.

Last week I featured Kafka’s recipe for roasted chicken. Please bear that in mind as you consider this post; to state the obvious, roast chicken is the first step in making homemade stock. Again, my thanks to Barbara Kafka for giving me permission to share these recipes from her wonderful book Roasting: A Simple Art. 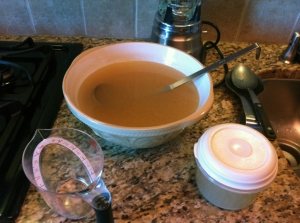 The finished stock, ready for measuring and freezing

Carcass and bones from a 5- to 6-pound roasted chicken, plus uncooked neck and giblets (I also add the wing tips I’ve trimmed before roasting the chicken); or 6 pounds chicken bones, necks and wings

3 quarts water or stock, or to cover by 2 inches
(I’ve never added stock and don’t recommend it doing so. See BK’s notes below.)

If using a whole chicken carcass, cut it up. Place the chicken parts or bones and parts in a stockpot with water to cover by 2-3 inches. Cover the pot and bring to a boil. Skim off the fat and scum that rise to the top. Lower the heat so liquid is just barely boiling. Cover if desired. Cook 8 to 16 hours, skimming occasionally, adding more cold water as needed. The more skimming, the clearer the stock.

Pour the stock through a sieve and let cool at room temperature as time permits; then refrigerate. Remove the art from the surface and any sediment from the bottom.

Some notes from Barbara Kafka, adapted from her introduction to this recipe: