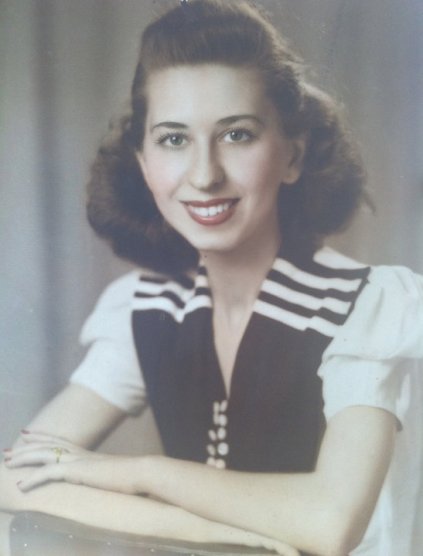 Early readers of The Midlife Second Wife will remember this post about my mother, but since writing it last November, a few things have happened in its brief existence that justify a return engagement. The post, originally titled “A Tale of Two Deaths: Losing my Mother to Alzheimer’s,” received a “Voice of the Year” award at BlogHer’s recent conference in New York City. Out of some 1,700 entries, BlogHer selected only 110. This is quite an honor for me and I’m humbled by the recognition, since there’s such a huge talent stream flowing through BlogHer’s Women’s Publishing Network. I’m also proud to announce that the post will appear in an e-book anthology being published by BlogHer and Open Road Integrated Media. You might be familiar with Eileen Goudge’s novel The Replacement Wife. Open Road is her publisher. I’d say we VOTY winners are in extremely good company.

I don’t believe that a publication date for the e-book has been decided yet, but as soon as the publishers make that determination I’ll announce the news here and let you know how you can purchase a copy.

Now that my mother’s story is going to have a life beyond the blog, I’ve retitled it. I am also preparing myself mentally and physically for the daunting task of completing her story—possibly for a future book. This post was originally intended to be the first installment in a series—and you’ll be able to read future installments just as soon as I can get them written—but now I’m rethinking the whole writing project. It’s quite possible I’ll end up with a book. We’ll see.

Here then, is my proposed first chapter of Have You Met My Daughter? My Mother, Her Alzheimer’s, and Me.

Have You Met My Daughter? My Mother’ Her Alzheimer’s, and Me

A person with dementia (or Alzheimer’s Disease) suffers two deaths.  The first death occurs when you discover the illness taking hold, erasing the vivacious mind and the vital spirit of the person you once knew. The second death is when the physical body expires. For these reasons, a bereaved person who loses a loved one—first to dementia, later to death—grieves twice. And although much has been written about mid-lifer’s—the so-called “Sandwich generation”—caught between caring for ill or elderly parents while still raising children, perhaps there is room in the literature for one more account. In November 2011, to mark National Alzheimer’s Disease Awareness Month and National Family Caregivers’ Month—and in honor of my mother, whose name was Angela—I began to write a series of essays about how I loved her and how I lost her. Not once, but twice.

This was the question my Mom, who had impeccable manners, regularly posed to co-workers or acquaintances when introducing me to them for the first time.

This was the question my Mom regularly posed to the women seated withher at a table in the secured-wing of the assisted-living facility where I regularly visited her. Without fail, each time I entered the room, she would ask these same women:

There was, of course, tremendous solace in the fact that despite her illness, Mom did recognize me as her daughter. Nevertheless, it was heartbreaking to see how her memory, her very sense of self, had deteriorated. The signs had been there for a while; it just took time for me to connect the dots.

Mom had always been what used to be called “high-strung.” She suffered from panic attacks, and was fearful of many things, including learning how to drive after my father died.

She had also always been something of a pack rat. Today there is a name for this: compulsive hoarding. But at the time when I was grappling with this issue in terms of my own mother, I did not know it was an illness for which there might be a treatment; I simply put it down to another of her eccentricities. I would clear out as much of the clutter as she would permit (there remained piles that I was forbidden to touch), and a week or so later, my efforts were obliterated. It was not at all unlike Sisyphus pushing his boulder up the mountain.

After several years of this, the hoarding had gotten so out of control that I began to fear for her safety. I was finally able to convince her that she needed help, and she allowed me to hire a cleaning woman to do her laundry, dust, vacuum the floor, and keep the bathroom and kitchen clean.

She and the cleaning woman didn’t hit it off, largely because Mom did not like anyone else touching her things. The woman, goodhearted and a good worker, called me to complain about what she could see was a losing battle. I was struggling over how to handle the situation when it resolved itself. Mom called me late one night in a real panic; I needed to come over at once. There was a terrible problem.

When I arrived, she pointed to a hole in the dining-room window screen—no larger than two inches in diameter.

“That woman you hired is stealing from me,” Mom said in a tremulous voice tinged with outrage. “Do you see that? That’s how she’s getting in. She’s sneaking in, crawling in through that hole.”

NOTE: The Alzheimer’s Association is not responsible for information or advice provided by others, including information on websites that link to Association sites and on third-party sites to which the Association links. Please direct any questions to weblink@alz.org.