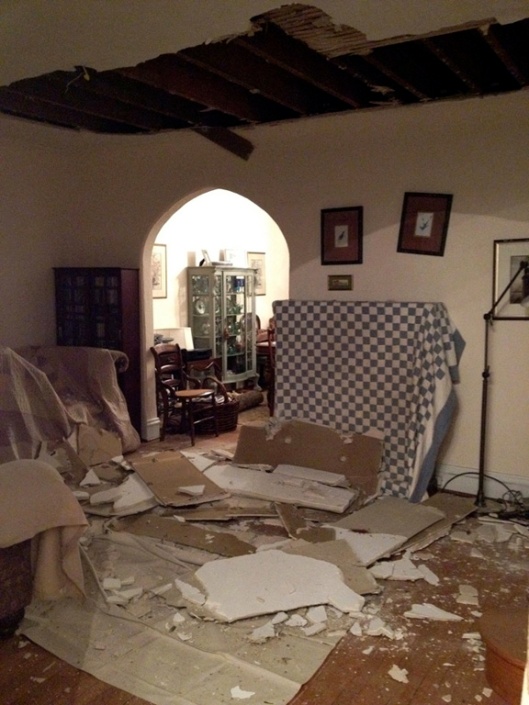 EDITOR’S NOTE: This essay was revised February 1, 2014, to include an after-photo of the living room, showcasing the great work of N. Chasen and Son. (Scroll to the end of the post to see the photo.) As regular readers of the blog know, John and I subsequently sold our beautiful townhouse in Richmond and moved back to Ohio. Look for future posts in the blog’s House and Garden section showing renovations to our new home in Northeast Ohio.

The picture pretty much tells the story, doesn’t it? But let’s get your questions out of the way first. Yes, our bedroom is directly above the living room. No, that’s not why our ceiling collapsed. (Wink wink, nudge nudge.) No, we weren’t in the room when it happened. Yes, the pets and we were safely asleep upstairs. No animals or humans were injured as a result of this catastrophe. Yes, it’s a real mess, isn’t it?

So what happened? Wish we knew. All we can do is surmise and engage in conjecture.

Several days before the collapse we noticed that a crack in our plaster ceiling had taken on an ominous appearance; it looked as though the ceiling could fall at any time. We arranged for a contractor to come out and evaluate the situation, and the following week (the day before his crew was scheduled to begin work) we prepared the area by removing all of our breakables and as much furniture as we could. Something told us to protect the remaining furniture, just in case. I’ve always been an “ounce of prevention” kinda gal, and those instincts didn’t fail us.

At 4:15 a.m., the next morning, we were awakened by what I thought was thunder. Imagine the loudest clap of thunder you’ve ever heard, intensify it ten-fold, and insert yourself smack in the middle of the din. We never expected our ceiling to give way, but we’re awfully grateful for the timing of our precautions.

And while we’re on the subject of timing, I should say a word or two about age.

We live in an English Tudor Revival townhouse that was built in 1927. It’s filled with the sort of charm you’d expect from the era, and as an added bonus, it’s on the National Register of Historic Places. But it’s 85 years-old. Stuff is going to happen.

According to documents filed with the National Registry, our enclave, known as English Village, was constructed as a multifamily planned community in what was once a tree-lined “streetcar suburb.” The trees still line our avenue, but the streetcars are long gone. 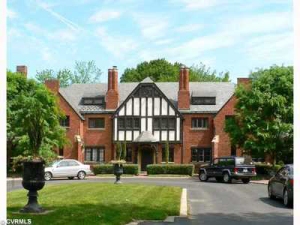 Designed by Richmond architect Bascom Rowlett, each of the 17 attached two-and-a-half story townhomes are formed in the shape of a U around a central courtyard. At the time, Rowlett’s plan was quite innovative for Richmond, indeed, for the entire country. English Village was designed as a cooperative planned community—one of the earliest such ventures in the United States, which is why it qualified for architecturally significant status. It is, in fact, considered a precursor of today’s condominiums, and  the concept was quite radical. (Most cooperative housing in America was built for the working class, with collective ownership of the property. English Village differed markedly in that it was built for the upper middle class, with each owner holding a clear title to his own property.)

I wish I had access to the actual sales prospectus. The document on file with the National Registry provides only this delicious snippet:

[Enjoy] the new lifestyle … While enjoying all the amenities, including [the] privacy of single house living with an atmosphere of social respectability.

An atmosphere of social respectability. A statement to do Downton Abbey’s Dowager Countess proud, what? Yes. Jolly good.

All of this history is interesting, but it doesn’t help much when you’re standing in the middle of your living room with what once was your ceiling clumped in dusty piles around your feet.

Luckily, we have an ace team on the job—Richmond’s own N. Chasen and Son. Here’s a picture of their head carpenter assessing the damage.

As I write this, we are into Day Seven of the calamity. Drywall has been installed and taped, and mud applied. Here’s how the ceiling looks right now: 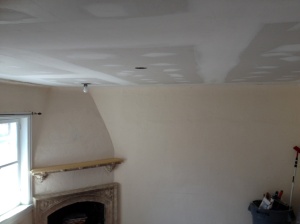 The project should be completed in a few more days. And by the look of things, this new ceiling should last at least 85 years. We won’t be around to appreciate its longevity, but if anyone living in our English Village abode is reading this post in 2097, please do me a favor and post a comment. A picture would be nice, too!

Here’s the finished look of our living room, showing the beautiful work done by N. Chasen and Son. You’d never know the ceiling was once on the floor! They did a great job painting the room, too. We used Benjamin Moore’s “Ice Mist” on the walls—a lovely white with just a kiss of blue in the undertones. This color will be my default for future rooms that beg to be white. 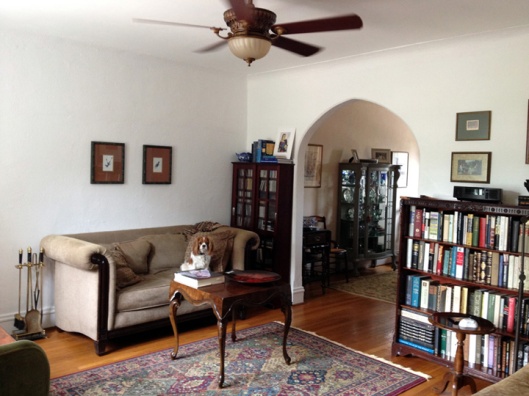 A note to the reader: No compensation or obligation by N. Chasen and Son was expected, and none has been extended, in conjunction with this blog post. I’m just a satisfied customer and glad to give them a shout-out.