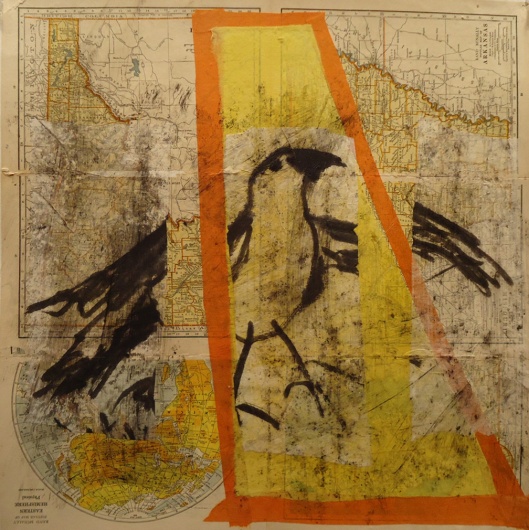 Ohio artist Leslie Miller was working on this collage—part of a planned series of mixed-media bird paintings—when she was diagnosed with uterine cancer in December of 2003. It is one of the last painted works she was able to complete before losing function on the right side of her body.

In one of cancer’s mystifying quirks, rogue cells bypassed Leslie’s lungs to cross the blood-brain barrier—a highly unusual occurrence—nestling themselves near the center of her brain. Her original cancer, cured after months of chemotherapy and radiation, proved relentless after all: she now had brain cancer. She endured Gamma Knife Radiosurgery (a closed-skull procedure), 10 weeks of radiation, and, finally, traditional open-skull surgery. Her brain—arguably the body’s most sensitive organ—could take no more. Radiation necrosis stilled the hand that had coaxed charcoal, oils, and brushes into astonishing works of art for nearly five decades.

Chemotherapy and radiation saved her life but made it worse.

Ask her what kept her going throughout her health crisis, and her placid demeanor grows slightly emphatic: “I’d just get disgusted with myself for being a crybaby, and tell myself: ‘Stop it! Stop whining and get busy!'”

And so she pushed back against the changes in her life. Eager to return to the bird series, she compensated for her increasing paralysis by resorting to more controllable surfaces on which to work. If she could no longer stand and manage a canvas, she could sit at her dining room table and draw on envelopes.

By 2006, however, the loss of the fine motor skills so essential to drawing was complete. In a masterful reinvention, Leslie exchanged brushes and pencils for a Panasonic Lumix digital camera, finding art in the ordinary elements of daily life: bowls of green apples and cherries (“Because life is a bowl of cherries,” she says with wry humor); a bunch of beets on an enamel table; photographs of every friend who stopped by to visit. No one, myself included, escaped without getting their “portrait” done. 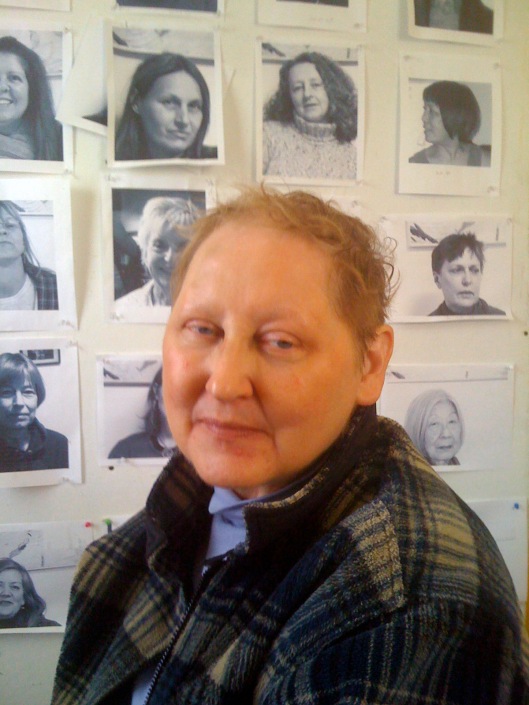 A portrait of the artist with her friends. The curator of her exhibition can be seen at the far right of the top row; I’m at the far left. Photo credit: Marci Janas Rich

Now, at 63—10 years after her first diagnosis—Leslie is overseeing preparations for a retrospective solo exhibition of her life’s work at the Beth K. Stocker Art Gallery on the campus of Lorain County Community College in Northeast Ohio. It is a dream come true, she says; she has fantasized about such an exhibition for years.

Born and raised in the college town of Oberlin, Ohio, where she lives today, this solo exhibition, appropriately titled Paper Painting Before Radiation, is the first to be presented in her native Lorain County.

Guest curator Jean Kondo Weigl has selected 81 examples of Leslie’s works on paper in mixed media—representing drawing, painting, printmaking, and collage—for the retrospective, which will be on view from August 26 through September 28, 2013. The works represent only a fraction of the art Leslie created between 1981 and 2006.

Even though Leslie’s art has won awards and earned her grants, residencies, and solo and group exhibitions—including one at the Cleveland Museum of Art’s prestigious May Show in 1993—much of it has never been seen before.

“Leslie has received significant recognition throughout her career,” says Kondo Weigl, “but her focus has always been the practice of her art, rather than its promotion. As a result, she’s received considerably less public attention and critical acclaim than her work deserves.”

I asked her what her art means to her. (Even though she is no longer able to paint, even though taking photographs has become more difficult, I cannot use the past tense.)

“It’s just a passion,” she tells me. “Something I get lost in. A kind of escape from myself.” She repeats a quote attributed to Mark Rothko that she recalls reading. “He said, and this is a paraphrase, ‘It’s nice when people come to see me in my studio, but it’s nice when they leave. It’s even nicer when I leave.'”

Leslie will just have to put up with the throngs of art lovers who will be clamoring to see her work. I suspect she knows how much pleasure this will give her.

About the Artist
Leslie Miller earned a Bachelor of Arts degree in religion from Bates College, and a Master of Arts diploma from the School of the Museum of Fine Arts in Boston. She has been awarded professional development grants from the Ohio Arts Council and the Contemporary Artists Center in North Adams, Massachusetts; she was in residence at the latter for three consecutive years in the 1990s and was part of group exhibition there. She has also held a residency at I-Park in East Haddam, Connecticut. She won the Best in Show prize at the Beck Center in Lakewood, Ohio, where her work was part of a group exhibition called Proscenium ’92.

Other group exhibitions include shows at the Erie Art Museum in Erie, Pennsylvania; the Cleveland Center for Contemporary Art; the College of Wooster Art Museum; the Mather Gallery at Case Western Reserve University; the Firelands Association for the Visual Arts in Oberlin, Ohio; the Pearl Conard Gallery at the Ohio State University; and the May Show at the Cleveland Museum of Art, which was juried and curated by Evan Turner, director emeritus of the museum.

Solo exhibitions featuring her work have been held at Jamaica Plain Gallery in Boston, the Greater Miami Jewish Federation in Miami, Florida; and in Israel at the American Cultural Centers in Tel Aviv and Jerusalem.

She began writing poetry in 2006, and Foothills Publishing released a chapbook of her work, Boom Time: 1946-1964, in 2007. She has since completed a nearly book-length manuscript.

18 thoughts on “An Artist Before Radiation… and After”