Sally Field very nearly lost the role of Mary Todd Lincoln, even though Steven Spielberg, the Academy Award-winning director of Lincoln, had already offered her the part in 2005. During a recent telephone interview, she told me how she fought to hold on to a role that could well earn her a third Academy Award—and how two-time Academy Award-winning actor Daniel Day-Lewis, who plays Abraham Lincoln, helped. My article about this astonishingly gifted actress, and her role in the epic bio-pic that is being called “Oscar-bait incarnate” (The Hollywood Reporter), appears in the November 11, 2012, edition of the Richmond Times-Dispatch.

That role earned Field her first Best Actress Oscar, and is one of the “steel magnolia” parts blooming at the centerpiece of her career. Mary Todd Lincoln takes her place alongside Edna Spalding (Places in the Heart, and a second Oscar win), M’Lynn Eatonton (Steel Magnolias) and Mrs. Gump (Forrest Gump).

At 66, Field is steeped in the methodologies of Lee Strasberg and the Actors Studio, employing those processes throughout most of her decades-long career. She called upon her craft as a Method actress, prodigious research, and “every bit of life that I know” to bring Mary Todd Lincoln to the screen. She adds that the work of the “brilliant” costume designer Joanna Johnston also contributed, as did her own physical transformation—Field gained 25 pounds for the role.

Watch the trailer for a glimpse of the majesty and moving humanity of this film, and to see a great actress at work.

Lincoln was filmed on location in Richmond and Petersburg, Virginia, last year.

“Sally Field: How Her Pluck Won Her Role in Lincoln” 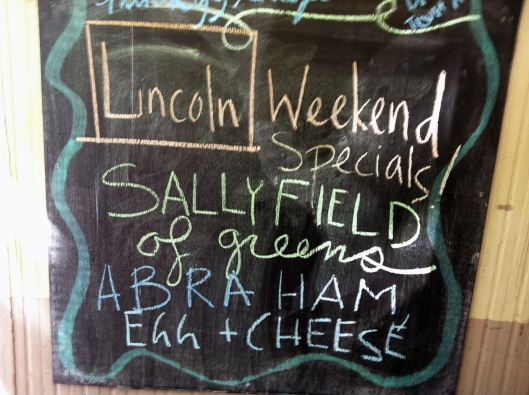 The stars are out here in Richmond, Virginia, where filming got underway last month for Lincoln, directed and co-produced by Academy Award-winning filmmaker Steven Spielberg. The film, based on Doris Kearns Goodwin’s book Team of Rivals, stars Academy Award winners Daniel Day-Lewis as Abraham Lincoln and Sally Field as Mary Todd Lincoln. And although I haven’t seen any bold-face names yet, John and I did have a bite to eat last Sunday at Lift Coffee Shop & Café, which features such charming additions to its menu as a HAM-iel Day Lewis sandwich (grilled on sourdough bread with ham, pineapple, and provolone, and topped with honey and barbecue sauce); a delicious BLT—the Joseph Gordon Lettuce—named in honor of actor Joseph Gordon-Levitt, who portrays Robert Todd Lincoln; and a tasty-looking salad, the Sally Field of Greens. Lift also serves up a wonderful cup of coffee.

My thanks to Stephanie Garnett, manager of Lift, for her generosity in sharing this recipe with The Midlife Second Wife!

For more information about film production in Virginia, please visit the website for the Virginia Film Office.